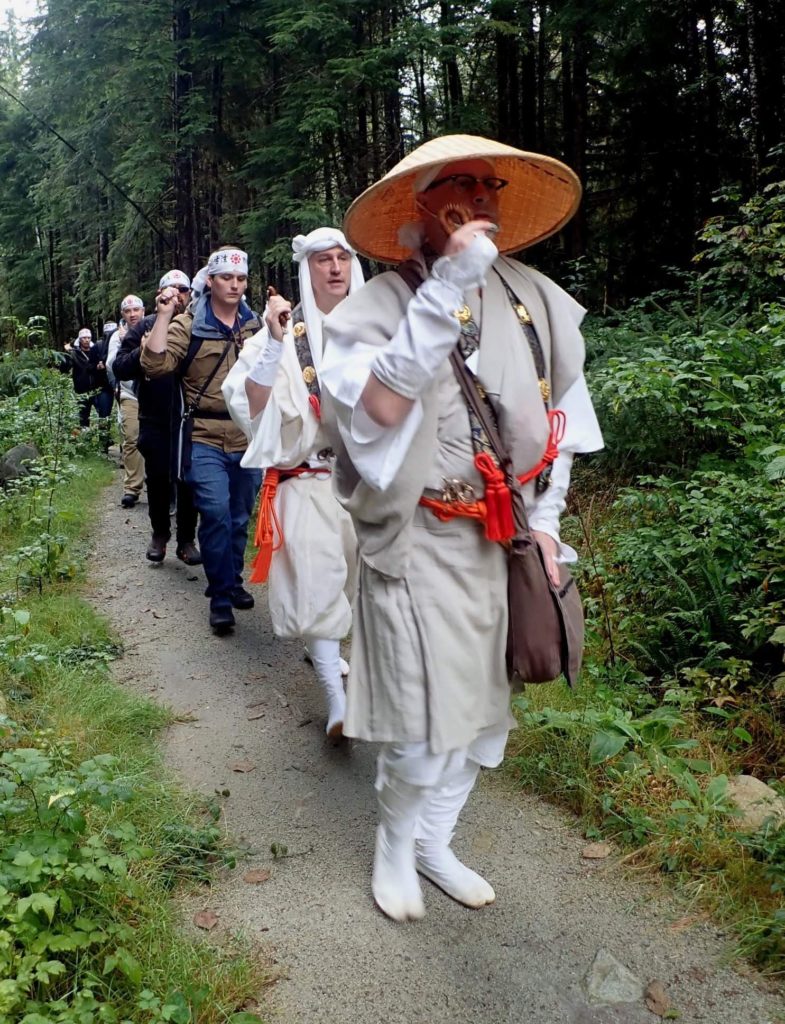 Rev. Kanjin Cederman, a priest of the Nichiren Shu Buddhist tradition, was interested in these traditional practices that were found associated with Tendai and Shingon traditions but had been lost with time due to the mandatory separation of Shinto and Buddhist practices in the early Meiji era. It was long understood that there were also these traditional practices that were based on the Lotus Sutra within the Nichiren Buddhist groups.  These Shugenja (Shugendo practitioners) were considered perhaps the early versions of what had influenced the Dai-Aragyo (100-day ascetic practice), which is still practiced today.

“ I was moved to create this practice because of my deep respect of the purification that is found in nature, and how modern people are missing this connection, as well as the land in which we establish the Lotus Sutra.”

We are an official group of the International Shugendo Association under the instruction of Soke Shokai Koshikidake.
https://www.shugeninternational.org/

Hokke Shugen is a renaissance of traditional practice from Shugendo. Shugendo is a tradition based on the syncretism traditions of Buddhism and Shintoism (shin-butsu 神仏).   Beginning around the 9th or 10th century, this tradition of Mountain ascetic practitioners would enter the mountains during the winter for extended practice, and then reenter society.  These practitioners were regarded to have been able to harness extreme spiritual powers that were considered essential to help with spiritual matters as well as to share the teachings of the Lotus Sutra.  There is not much information available at this time concerning the specific practice of Hokke Shugen that still exists, this is due to the practices being outlawed.

Within modern Nichiren Shu Buddhism there are many aspects and remnants of this tradition still with us including the sacred mountains Shichimen and the use of the Bokken and Juzu for the Kito Purification ceremony. As we see how Buddhism assimilates to the different cultures and geography of lands outside of Japan, it is amazing how these practices and concepts have been accepted and grown.

You may think that Kishimojin is just a deity found in Japanese Buddhism.  However, it originated from an ancient cult found in India and she exists in the religion and beliefs of the indigenous people of the Americas.  The mountain in which I was led, indeed is the home of Kishimojin, upon further study it has been shared the story of the “Basket Carrying Ogress” common to the folklore of the many Northwest Coast tribes.

She catches humans, especially naughty or careless children, and carries them off in her enormous pack basket to eat them in her lair. Although there are some Northwest Coast legends where Basket Woman has a greater mythological importance, in most tribes she primarily plays the role of a bogeyman and fairytale adversary.  She was used by parents for disciplinary and educational purposes: to warn children not to stray, and to be good, or she would get them.  The Skagit tribe, near to where the mountain is, have shared this story through their oral storytellers.

The whole mountain takes about 5 hours to go up 5 hours to come down.  During this Autumn Mountain training, we enter the mountain with the special Kishimojin Statue given to our dojo by Onjuin Temple, Japan.  She is carried in a portable shrine that practitioners take turns to carry and protect.  We wear all white to symbolize entering the spiritual world.  We also take a special Ofuda tablet that is large and is also carried by taking turns by the practitioners.   Upon entering the mountain, they walk through the ten worlds of Ichinen Sanzen (Three thousand Worlds contained in a Single Moment.)  This allows each person to experience with their whole body and mind this essential concept in Nichiren Buddhist practice.  We endure through the worlds and investigate our own lives as we move towards the Buddha World.  We endure together and accomplish the goal together.

Here is a basic history of Shugendo as a tradition.